The Best .338 Sniper Rifle in the World 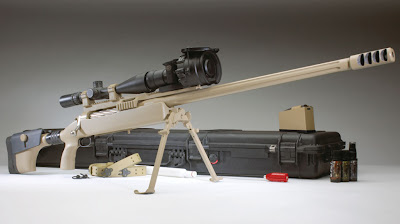 The sniper is one of the most feared specialists of war and he is one workman who definitely relies on the right tools. There are a surprising number of sniper rifle manufacturers out there, so it’s a big call when one declares itself to be the best .338 in the world, though the raw specifications of the Accuracy International L115A3 sniper rifle suggest there is merit to the claim. The UKP23,000 (USD$34,000) rifle was designed incorporating performance-enhancing features gleaned from international target shooting and fires an 8.59mm bullet which is heavier than the 7.62mm round of the previous L96 and hence less likely to be deflected over extremely long ranges. Put the 6.8kg rifle in the right hands and it can hit a human-sized target from 1400 metres. Even at that range, it hits harder than a .44 Magnum does in the same room.

The first batch of SSIP systems was deployed to Afghanistan with members of 16 Air Assault Brigade earlier this year and reports suggest the claim of "the best .338 sniper rifle in the world"

Portsmouth-based Accuracy International was established in 1978 by two-times Olympic shooting Gold medallist Malcolm Cooper, and its high-accuracy sniper rifles are in use with military and police forces worldwide including many elite military units (the British SAS and reportedly the US Delta Force too).

In terms of the best .5o sniper rifle in the world, that mantle almost certainly goes to the McMillan Bros Tac-50 used by Canadian Special Forces in Afghanistan that holds the all time record kill at 2430 meters.

The skill of Canadian snipers combined with the fire power of the “Big Mac” made it very dangerous for the Taliban fighters to expose themselves if only for a few seconds. There are many accounts of the 2430 meter kill shot on the net. That's two and a half kilometres!